Lenovo is the global leader for the sixth straight quarter 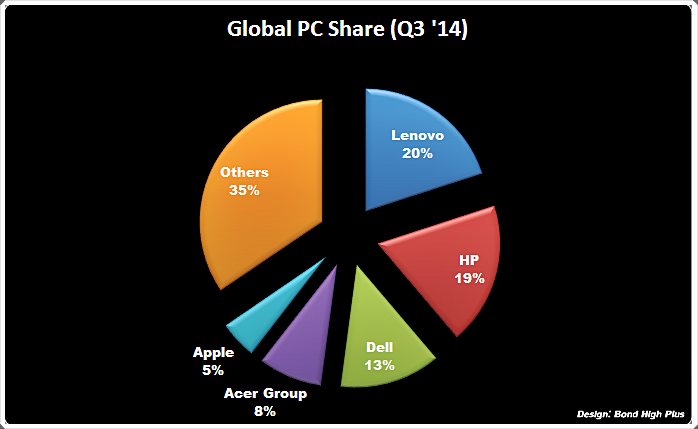 The latest global PC sales shipments figures from IDC show that while the overall PC market shrunk year-over-year; the actual results aren’t nearly as bad as forecasted. PC shipments for Q3 2014 fell by 1.7 percent compared to the same period last year; this is compared to a forecast that said sales would be down 4.1 percent.

When it comes to the top OEMs, Lenovo secured first place with a 20 percent share of the global PC market during Q3, representing a 11.2% gain over its performance during the same period last year. Not surprisingly, there were high-fives to be had from the Lenovo camp regarding its sales performance.

“Reaching the 20% mark in global PC share is a great milestone for Lenovo – and we got there even faster than expected,” said Lenovo chairman and CEO Yang Yuanqing. ”While others have been looking for a game plan that works, we have been executing ours and the results speak for themselves.

We can’t be certain, but it appears that the last statement may be have been direct at Hewlett-Packard, which still sits in second place with 18.8% of the global PC market. HP announced earlier this week that in an effort to “empower people to create, interact, and inspire like never before,” it would split into two business groups: HP Inc. to focus on PCs and printers and Hewlett-Packard Enterprise to focus on its corporate customers.

Rounding out the top five where Dell (13.3 percent), Acer Group (8.4 percent), and Apple (5 percent). Normally, being listed in fifth place in the PC sales race wouldn’t be considered such an amazing feat, but as The Verge points out, Apple rakes in over 50 percent of the PC industry’s profits according to Sanford C. Bernstein & Co. analyst Toni Sacchonaghi.